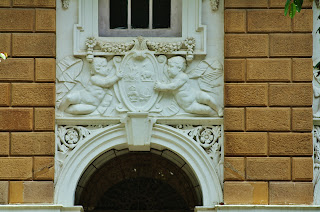 As one passes through the one-way section of the M.G. Road ending in Flora Fountain, the Standard Chartered Bank building looms beautifully on the left side of the road. The bank carries a lot of historical importance, being an organisation dating back to the establishment of the Victorian era of the British government, and the building itself is a gem of early 20th century construction.

Standard Chartered Bank is a highly reputed bank with a global presence in over 70 countries. A common man often assumes it to be yet another humdrum multi-national bank with stiff suited bank executives counting wads of cash, wading through reams of computerized documentation and negotiating deals with equally stiff upper lipped corporate clients. A bank building is often never associated with a sense of history or architectural beauty.  I attempt to correct this myth with this post.

The Chartered Bank owes its origin to Queen Victoria's Charter, granted to an enterprising banker for setting up business to actively support the trade in the great imperial trade routes connecting India to its global connections both eastward and westward. It was the age of the formation of the well established trade between Myanmar (then Burma), Indonesia, Singapore and Hongkong. The story of the bank is in a way an integral part of the great expansion of the colonial trade economy, thus connecting India to a world economy.

The Chartered Bank was founded by James Wilson by getting a Royal Charter from Queen Victoria in 1853. The bank's first operational branch was at Kolkata, the current location being Netaji Subhas Chandra Bose Road (NS Road, B.B.D. Bag / Dalhousie Square). Then the bank rapidly expanded into Bombay (now Mumbai) and Shanghai in 1858, Hong Kong and Singapore in 1859 and Borneo (now Indonesia, then Dutch East Indies) in 1863. That completed the grand trade quadrangle of the early modern age. With the opening of the Suez Canal in 1869, and the great profusion of the cotton mills investments in Mumbai around the same time, the bank grew alongside the growing merchant and industrial economy of the city. (Standard Chartered Bank was formed when Chartered Bank merged with Standard Bank of British South Africa in 1969).

This site was taken on a 99 year lease by the Bank and the building completed in 1902. It is in a neo-Classical style and designed by the illustrious F.W. Stevens, though he died before it could be built. Charles Stevens, his equally famous son completed it through his partnership with Gostling.

The facade is in buff-coloured basalt stone and cupolas, mouldings, columns, cornices and carvings are in Porbundar, Seoni and Bath stone. The building was designed with a huge banking hall (which is still functional today exactly as it was then), offices, private rooms for the manager and some servant / staff rooms. 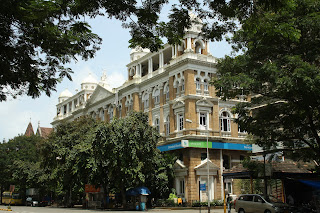 The pediment (the triangle at top center of the facade) is an important feature of Victorian age buildings in Mumbai. The pediment in the bank building carries a beautiful set of figures representing Britain (as Britannia the Empire), India, China and Australia. These were the most significant parts of the British Empire then in at its peak, and the bank has symbolised its presence in these colonies in the pediment. The statues of Progress and Brittania are common yet important themes in Victorian age buildings. These are used in grand buildings of London (as in the Commonwealth Building, Whitehall) and also in India (including in the Writer's Building Calcutta). The Victoria Terminus Mumbai (now Chhatrapati Shivaji Terminus) also has a huge statue of Progress on top of its dome. As the colony moved from the control of the East India Company to the direct governance of the Crown there were significant changes in the political administrative investment made, including grand architecture, civil works and public works like waterworks, markets and dockyards. Symbol of Progress was a recurrent theme in the construction of that age. Standard Chartered has a beautiful statue of Britannia on top of the pediment. 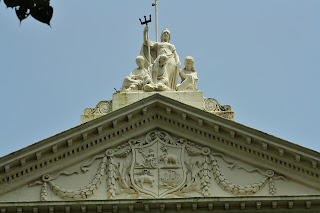 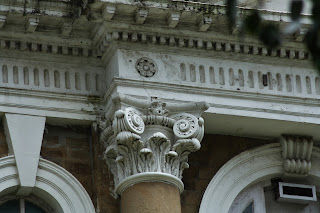 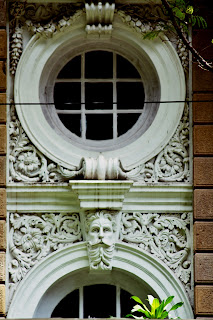 The pillars also are exquisitely designed and the tympanas (the triangle in centre of the arches) are also decorated with figures. The facade is of a Corinthian order. Behind the columns of the portico two single storeyed round arches provide the outdoor corridors and circulation through the floors, though these have been sealed as part of modernisation and installation of airconditioning. Mackenzie & Co of the Byculla Saw Mills manufactured the interior woodwork (of which virtually nothing remains now), and there was Minton tiling on the floor (also damaged with natural wear and tear and replaced in restoration), and this was provided with electric fans as part of original design.

The interior is is a huge rectangular block, fifteen bays across and nine bays deep, with a courtyard or service area in the rear. There is no grand central staircase, since it was designed to be an utilitarian building, and the upper floors are accessed through side staircases. There are also private staircases and a few typical corridors of old-world charm. The upper most floor had the manager's housing and servant quarters, though all that area is now taken in as part of the expanding branch operations and customised with swank modern office partitions and furniture. Thus Stevens design enabled a complex ground plan to take care of the needs of its illustrious client. By keeping the hall tucked in beautifully under multiple bays, full advantage is taken of the extended ground floor height to give the space a sense of grandeur. Skylights illuminate the hall while no direct sunlight was allowed to cause heat in the main working area. A verandah above the halls allowed the cooling breezes to enter the interiors but blocked out the glare. It is altogether an innovately designed beautiful building. It overall exudes the confidence of an empire at the height of its power.

The public areas of the building are freely accessible to customers of the bank, while special permission is required to go to more private office areas. Photography is not allowed inside, since it is a fully functional branch and there are security standards to be adhered to.

While various other banks were founded around the same time, they benefitted from short term business booms. But Chartered Bank was to stay and surf through the severe ups and downs of colonial economy, and then through the new age banking of post-colonial, independent nation. Their motto, "here for good" carries a lot of positive symbolism if placed in the historical context.

The building was carefully restored to an almost-original state a few years ago and is a gem of architecture.

The area is best accessed either by walking from Chhatrapati Shivaji Terminus on the central railway line, or by a local taxi that takes about 10 minutes for a short distance of crossing D.N.Road. The building is close to Oriental Building which is a Gothic marvel to admire. It is in the core of the heritage area and is best walked around in short walks, covering the PWD, Telegraph Office, Flora Fountain, High Court and University on one side, and the HSBC, Bank of India, New India Assurance etc and going on to Elphinstone College, Royal Institute of Science (now National Gallery of Art), the Prince of Wales Museum (now Chhatrapati Shivaji Maharaj Vastu Sangrahalaya), etc.
Nearest public parking spots are in Flora Fountain, Kala Ghoda or at Shyama Prasad Mukherjee circle (Wellington Fountain).

Corrigendum: I had erroneously mentioned the statue of Brittania as that of Progress in an earlier version of this post, and thanks to Jacqueline Banerjee at @Victorianweb who was very kind to point it out, I have immediately corrected it. My apologies.

This beautiful mosque constructed in Akbar's reign in Delhi, in the Dinpanah area, the capital city of Humayun, is evo... 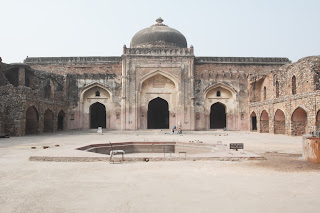